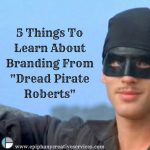 5 Things To Learn About Branding From “Dread Pirate Roberts”

We often think of a brand as a logo, a message, a movement, or a successful company. Sometimes, a brand is a person…or that person is the brand. Clear as mud? We thought a good pirate story this month might be a fun way to help relay our thoughts. Many of you may be familiar with the hit 80’s film… Read more →

What The Heck Is “PR” Anyway…Really?

PR is Marketing, Right?…No Have you always considered public relations as just another word for marketing? What if we told you they are similar, but not interchangeable. This month Epiphany Team Member and PR guru, Mary Anna Davis sat down to clear up the confusion.   As a public relations professional, my job is constantly being confused with marketing. What exactly differentiates… Read more →